Early History of the Day of the Cowboy Day

On Friday, June 20, 2008, the National Day of the Cowboy resolution also passed in the Arizona State Legislature, making Arizona the first state to pass the resolution. We asked Arizona Representative, Jennifer Burns, to sponsor the resolution, which she readily agreed to do. In thinking it over though, Ms. Burns felt it would be more meaningful if it was sponsored by Senators Jake Flake and Jack Brown, the two remaining Cowboys in the Arizona legislature. Senators Flake and Brown both accepted that honor, but sadly, Jake Flake passed away before he was able to introduce the resolution. However, it was subsequently introduced in his honor, by Jack Brown, and passed easily and concurrently in both the Arizona House and the Senate. In 2009, the resolution passed in New York, Texas, Oklahoma, Kansas and Arizona. It was also proclaimed by a number of governors, mayors and town councils.

In the words of the former President Bush, “We celebrate the Cowboy as a symbol of the grand history of the American West. The Cowboy’s love of the land and love of the country are examples for all Americans.”

Early in November, 2004, I (Bethany Braley) began working for Bill Bales, at the magazine he owned at the time. Soon after starting there, Bales asked me if I could make his “Vote for a Cowboy Day” project “happen.” At that time, I took charge of the project and with the guidance of several of my friends and former colleagues in Washington D.C., changed it to the National Day of the Cowboy project and enlisted Senator Thomas as a sponsor for a resolution. I worked with Thomas’s staff and helped craft the resolution itself. I put together a radio campaign to promote The Day and pursuaded the Bales to create a Hatch poster for the project.

Senator Thomas subsequently introduced the resolution in March 2005, but while it was in mark-up, the text defining the Cowboy Day was changed from the “Fourth Saturday in July” (permanent) to simply July 23, 2005 (once only) at which time Bill Bales informed me and Editor Paige Mckenzie, he was finished with the project and someone else needed to carry the ball while they went back to selling advertising. I resigned from the magazine in June 2005, expressing in my resignation letter my intention to form an organization to work to make the Day of the Cowboy permanent. Later, Bales sold the magazine to its current owner, media conglomerate Active Interest Media, Inc. and its operations were moved from Wyoming to Boulder, Colorado.

Cynthia Reed, Senator Thomas’s Legislative Aide, my contact as manager of this project for Bales, notified me in an email in May 2005 that the resolution would not actually be signed by the President. She also explained to me in a phone conversation that the highest acknowledgment the resolution could receive from a President was a Letter of Support.

The resolution won’t be signed by the President. We have sent a letter requesting that he proclaim the day, but have not heard back. I do not believe there is any proclamation ceremony. Sorry, I guess we will have to celebrate on our own when the time comes. 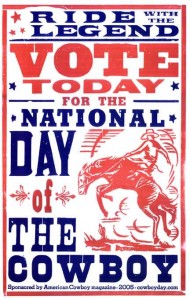 An important piece of our background

‘We’re not doing anything with it. We did our part. We need to go back to selling advertising and let someone else carry the ball now.” (Spoken by Bill Bales, in March 2005, then owner and Publisher of American Cowboy magazine, when asked by Editor Paige McKenzie, and NDOC Project Manager, Bethany Braley, what the magazine planned to actually do with the National Day of the Cowboy in the event it passed for 2005 in the U.S. Senate). The National Day of the Cowboy organization was subsequently founded in Wyoming, on June 5, 2005, for the purpose of seeking permanent passage of the resolution, several months after Bales expressed this position of having achieved his goal for the National Day of the Cowboy and having no desire to remain involved with it.

Over the years from 2005 until the present, the text for the bill has changed very little. Below is the proposed verbiage we now send to state volunteers. We also encourage each state to include a ‘Whereas” or two specific to the cowboy culture and history of their own state.

National Day of the Cowboy Bill

Whereas the cowboy embodies honesty, integrity, courage, compassion, and determination;

Whereas the cowboy Vaquero spirit exemplifies patriotism and strength of character;

Whereas the cowboy is an excellent steward of the land and its creatures;

Whereas the core values expressed within the Cowboy Code of Conduct continue to inspire the pursuit of the highest caliber of personal integrity;

Whereas cowboy and ranching traditions have been part of the American landscape and culture since 1523, and today’s cowboys and cowgirls continue to strive to preserve and perpetuate this unique element of America’s heritage;

Whereas membership and participation in the National Day of the Cowboy Organization and other organizations that encompass the livelihood of the cowboy, continues to expand both nationally and internationally;

Whereas the cowboy and his horse are a central figure in literature, art, film, poetry, photography, and music, and

Whereas the cowboy is a true American icon occupying a central place in the public’s imagination;

Now therefore, be it

Resolved, that the House of Representatives and the Senate —

(1) express support for the designation of a ‘‘National Day of the Cowboy’’; and

(2) encourage the people of (your state’s name) to observe the day with appropriate ceremonies and activities.