Thanks to our volunteers in Arkansas, Jennifer Michaels and Marshall Mitchell, the cowboy flag now flies in 34 states. Marshall, who is a western entertainer, displays it on stage whenever he performs. 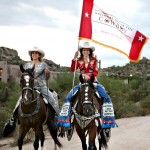 I sent a National Day of the Cowboy flag to Lumber Bridge, North Carolina this morning, for their annual National Day of the Cowboy celebration. This was the first NDOC flag to ship there, bringing us to a total of 34 states now flying the flag. Those states are Arizona, California, Colorado, Florida, Georgia, Idaho, Illinois, Indiana, Kansas, Maine, Maryland, Minnesota, Mississippi, Missouri, Montana, Nebraska, New Hampshire, New Mexico, New York, North Carolina, North Dakota, Ohio, Oklahoma, Oregon, Pennsylvania, South Carolina, South Dakota, Tennessee, Texas, Vermont, Virginia, Washington, Wisconsin, and Wyoming. Give us a shout if you’d like to see your state join the growing list of participants. If you want to order a flag for your ranch, parade or event, give us plenty of time as they go quickly as the National Day of the Cowboy draws nearer.

We’re grateful to the wonderful folks at the Dodge City Convention & Visitors Bureau who ordered seven more flags for their National Day of the Cowboy celebration which takes place during Dodge City Days. I’m sure they have more NDOC flags than anyone else at this point, probably close to 20 flags. Still hoping for that order from Utah too, so we can pass the 33 milestone. In any case, we are more than halfway to the goal of fifty states.

The folks at Lionheart Resort in Cumberland, Virginia, just ordered a flag for their Annual NDOC event. This means the flag now flies in twenty-eight states!. Also mailed the flag to the Canadian Wild West Show so we’re up to seven countries. Matt Mead, the Governor of Wyoming has a flag to fly over the Wyoming Capitol in Cheyenne on the fourth Saturday in July, and CA Senator, Ted Gaines, now has our cowboy flag as well whcih he too says will fly over the California Capitol in Sacramento on the National Day of the Cowboy.

The National Day of the Cowboy flag also flies in England with the British Cowboys at Western Trails, and it flew in Iraq and Afghanistan with our Desert Cowboys while they were in service to America. It has been carried around the world by a group of Western performers, to Ireland by spokesperson, Kelsee Brady Bradshaw, and thanks to spokesperson Hotshot Johnny, the National Day of the Cowboy flag flew in Lebanon on July 24, 2010 at the largest rodeo ever produced in the Middle-East. Tom and Jan Bishop will be flying their NDOC flag in Canada, as part of their Canadian Wild West Show.

In 2008, this special flag flew to the International Space station, carried by NASA Commander, Mark Kelly, aboard the Discovery space shuttle. This event was even covered in the Washington Post. U.S. Congresswoman Gabrielle Giffords returned the space flag to us after she carried it on horseback in the Rex Allen Days Parade that year. 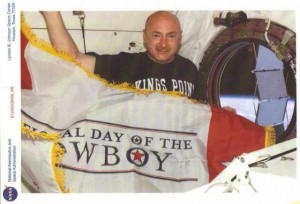 We need someone from just twenty-two more states to throw their hat in the arena to reach our goal of all fifty states displaying the National Day of the Cowboy flag, a powerful symbol of the unity in this quest. If your state or country is not on the flag list, please consider becoming state number twenty-nine or country number nine, and order your National Cowboy flag today.

Once you have your NDOC flag, please send us a photo of it flying so we can add it to our growing collection of historic cowboy flag photos. Don’t be caught ridin’ drag! Order your NDOC flag today.